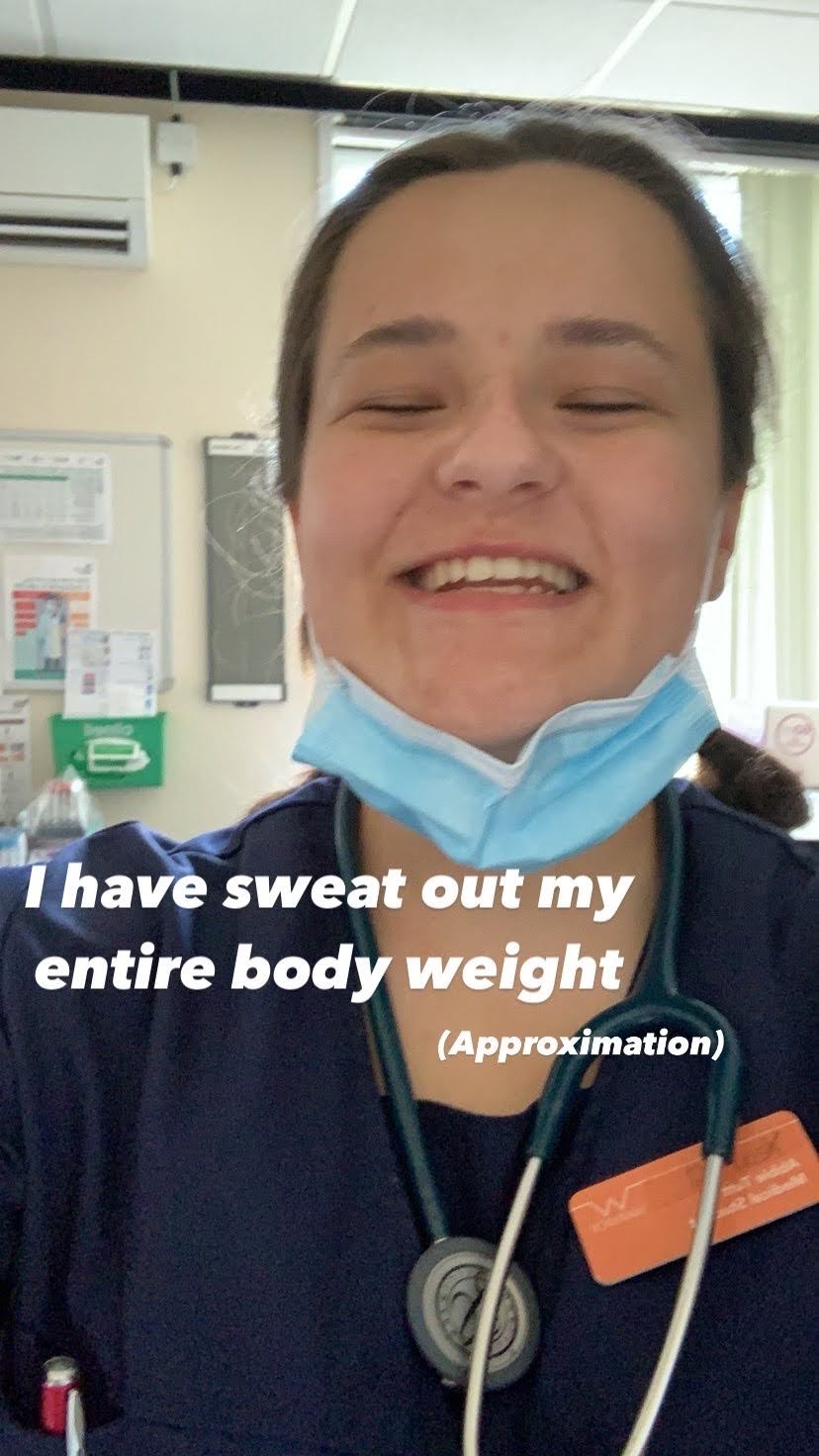 So, you know I said last block I would have a shorter blog? Well, the timing of that sentence wasn’t quite right. This week was the week when I returned to being an actual full time medical student.

Thankfully just some tutorials today that started at 10am, BLISS! These tutorials are meant to help us pitch our own work right and if you are lucky, complete the work for you. We had a full day of workshops so it was just sat in a virtually empty lecture theatre all day.

There’s not really much to write about apart from the fact it was BOILING outside, this was of course, the week of the heatwave. However, to end the day off in the right direction, Kaludio and I took a trip to the infamous Gelliot Ice cream bar. Yes, it is amazing as it sounds:

Tuesday brought a bit of a weird half day and a first for us. When learning clinical skills in the last block we had an afternoon of teaching and then a couple of weeks later (when you have normally forgotten everything), you are assessed. This time round it worked a bit differently. We were sent online learning modules and I self-taught myself ECG’s (OK, I basically knew that already) but NG tubes were something I really was not expecting to learn on my own and go and be assessed on the next day. (NG Tubes are feeding tubes passed through the nose, down the back of the throat and into the stomach. They are not pleasant to have inserted but can be the difference between life and death in serious cases).

Thankfully the nurses running the TDOCS were lovely and supported us through each one so it was the highest mar I have ever received for a TDOC (lets ignore the fact everyone got a perfect score).

We had nothing for the rest of the day so I decided to get some tests done of my own. I had been “prescribed” and X-ray before lockdown for my hip and it was starting to hurt again so I took myself down to get it done. It was weird sitting there as a patient in the surgical gowns, especially when you are trying to get something to stay shut at the back which isn’t designed to stay shut at the back.

After I thought I had my outpatients appointment for my ears but after an hour of sitting in the sun I suddenly realised I had not only got the wrong day, but the wrong week. Nice one Abbie.

Nice normal day back on the ward today. Well, I say normal but this was a heatwave and our scrubs really do not allow the body to breath so within 5 minutes of getting onto the ward I felt soaked through. The ward temperature was nearly 30 degrees Celsius and we were just melting on the ward round.

Kaludio and myself managed to duck into the air-conditioned equipment room to gain some body regulation at one point and walking out of there to the ward felt like we were getting off the plane in Spain. I couldn’t understand how patients were sat there with blankets on. We also had the nicest consultant that day, they were teaching us around the ward round and at the end offered to do our sign off’s for the block. RESULT. He also insisted that we should not be in the wards but outside enjoying the sun, something which our F1 agreed on.

We stayed to put some cannulas in the patients that morning as most were going to need IV fluids to prevent Acute Kidney Injuries developing in the next couple of days. I had a patient who’s veins were just beautiful so my job was easy. The ward was also treated to ice-poles which was just the best thing to ever happen:

We finished our jobs at 12pm so we decided that Ice Cream was also needed – cue Ice Cream trip #2 of the week:

So very close to the end of the week. I am so tired, I don’t get how I was pulling the ridiculous hours I was during Speciality block AND keeping up with three presentations a week off the list.

However, today was significantly cooler as we had an incredible thunderstorm the night before which just lit up the entire nights sky. We had the ALERT course we were originally meant to do back in March. It was good as it made you aware of why we do the A-E assessment but it wasn’t until the afternoon that I realized just how far I had come along. We got free food and drink throughout the day (que me panicking as I watched my calorie budget drop due to the sandwich I ate which was nearly 1/3 of my daily count).

In the afternoon we were ran simulations of a deteriorating patient where we had to conduct an A-E assessment. My first one was a bit shaky but my second one I just got praise and advised to be a bit more flexible with my diagnosis as I can be a bit narrow sighted.

I felt like I could have been an F1 in A&E and that evening I went home with the biggest confidence boost I have ever had. I was finally beginning to feel like this was going to happen, I was going to be a half competent doctor one day.

Thursday was also the day the whole A level thing kicked off but I will dedicate another post to that as it deserves more than a paragraph.

END OF THE WEEK

I made an agreement with the rest of my car share to have a half day as we were pretty tired. Oh what dreams we make.

You quickly find out that when you plan to have a half day, you end up having the longest days ever on placement.

We rocked up to the ward round and were asked to prep the notes for the two newcomers. I toddled off and wrote up basic history and recent investigation tests and once I was finished I toddled back to the nurses station. Whilst I was gone the F1, CT1 and PA had all arrived and asked me to present the case back to them.

The consultant turned up and God did my anxiety rocket. I had to re-present the patient back to her and discuss some points (tip for future Abbie – trends are as important as numbers) for treatment. The consultant then went, go and sort her out then. I stood there. What do you mean?

Well, go and have a chat – take some bloods so we can check how she is doing, document it and I’ll catch up with you in a bit. I stood there flummoxed but equally excited. I got to play F1 for an hour.

I know I have a problem with my anxiety levels but boy I did not realise the extent of them until this time.

I interviewed the patient, did their bloods, got everything ready for sign off (turns out I could put my own signature on them as they “never check the signatures”) and presented back in time for the regular ward round. It was a straight forward case but god was it a rush. I felt like a capable human for once in my life.

We stayed and did some more cannulas and bloods before lunch (one of which we had to get the reg to do as it was so difficult) but we were hinted at the possibilty of NG tubes after lunch.

Coming back we had two patients who needed NG tube insertion. Klaudio did the first who had lost capacity so was difficult, but we later found out he had managed to nail his first NG tube!

Mine, well mine was slightly more difficult. The patient had mobility issues and some movement issues, so it was more difficult to place the tube. They also kept giving and removing consent and there was a big decision to make if they had capacity or not. We tried to find this out but it was proving very difficult.

After two attempts (both consented for by the patient) we gave up as it was not sitting properly and I didn’t want to cause any more distress. IT was left as a weekend job as it was not getting done on the Friday. We ended up playing a weird medication quiz as our F1 wrote up the drug chart for another patient with our ward pharmacist adding the sound effects and it was just an hilarious way to end off the week.

It hit half five however, and my hip began to signal it was time to go home. I got back at 6:15pm and was exhausted. I’ve been suffering with hip pain for a while but hopefully that X-ray will show something that I can fix !

It’s weeks like these you have to hold on to as you will end up with weeks when everything just goes to pot and you give up. I really did feel like I was going to be a doctor after the end of this week. Let’s hope Covid doesn’t screw up more than it has done already.