So on the 20th July, I officially graduated from UCLan. It was a bittersweet day as I had been looking forward to it since I started but it would be the last time that I saw most of my course. I could hardly sleep the night before, ridiculously excited and full of nerves because if anyone was going to trip over… It would be this idiot writing this blog.

We stayed in a hotel in Preston because it’s just a bit of a drive from Kent, apparently, they were full of graduates. Breakfast that morning brought a strange mixture of people all done up for the morning graduations ( Pharmacy, Biomedical Sciences and Engineering) and people like me who still sported a bed head and had just thrown on shorts and a T-Shirt.

My family were sweet and surprised me with graduation presents during breakfast including a cute UCLan teddy that I had been wanting since the first year :

We were then already by 10:30 …. 4 hours before my ceremony. What can I say, I was excited. I had watched some of the morning ceremonies online as being a Neuroscience graduate I was between the School of Psychology ( which I would be graduating with) and the School of Pharmacy and Biomedical Sciences. I wanted to see some of my friends graduate and hopefully spot a few of my lecturers in the crowd.

Now as you probably know the UK has been on some sort of freakish weather hype with temperatures rarely below 25 degrees so I was pretty sure I would get some nice outdoor pictures but as luck would have it, it rained. The ONLY day of the week. And not only did it rain, but the morning ceremony was fine, all summery, it only rained for the afternoon. Lucky I guess?

However, we made it to the guild without having to swim and I put on my gown. It felt incredible, I was finally there. It was perhaps the proudest moment of my entire degree and I hope my nan saw me from wherever she is.

The obligatory photoshoot later and I was finally ready to go into the hall. Excited does not even cover how I felt.

I took up my seat and sat talking to my friends who were equally nervous before the ceremony began. They had a circling picture board from twitter on the screen so of course,e, I took the opportunity to humiliate my course mates … 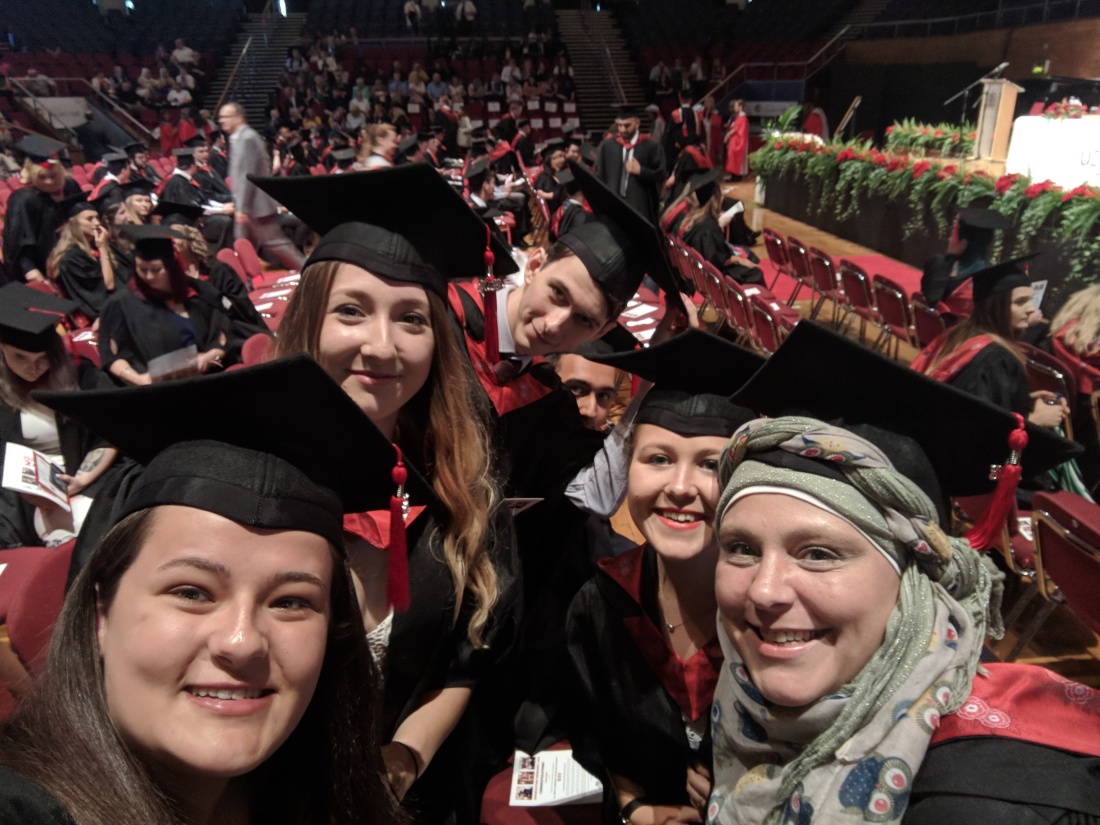 We sat through the ceremony clapping for everyone. Whilst the speeches were going on, they were selecting students at random in the crowd. Once I got selected I turned to the camera and gave the biggest smile ever, pretty sure I was meant to be paying attention to the speeches but hey ho.

The school of Physical Sciences and Computing were before us and some of those names were impossible to say. However, the head of that school nailed every single one of them and half the time I was clapping for his pronunciations rather than the actual graduates. Soon it was the turn of my degree and I was, of course, last to walk across the stage. I was so happy and I think I practically ran across the damn thing looking towards my lectures and then shaking Mike’s hand before walking off, but not without doing an air punch first.

We then had the traditional hat ceremony. Now the UK government decided to take the fun out of graduation and we now have to awkwardly wave them in the air instead of chucking them everywhere. Except our ceremony seemed to muck this section up and waved too early so we ended up flopping our caps around twice (I’m not complaining, I needed to get my pent-up energy out somehow 😂).

Then it was over. I had finally graduated. Our lecturers and the other humans who were on the podium formed a guard of honour as we walked out and went into the small hall were we became stuffed into it. I quickly decided with my family to walk down to foster building ( in the torrential rain) and see some of my lecturers and coursemates as well as getting a few pictures.

I had caught up with my personal tutor and she said how when I walked across the stage she had a flashback to the nervous wreck I was during 1st year and how she thought “oh dear, why am I stuck with this one”. Not sure if that’s a compliment or not but I’ll take it as one ¯\_(ツ)_/¯

After about two hours it was time to leave my beloved uni behind. I returned my gown ( I got to keep the Cap) and we headed for food.

I keep looking back on my graduation day with a smile on my face. I would re-live the entire thing again if I could ( and I will hopefully be in 4 years).

UCLan has been the making of me. It has brought me out of my shell and let me believe in myself again. It has given me the confidence to believe I can do anything and without the support of the fantastic tutors there, I would have never got into medical school. Even though they are all amazing, special mentions must go to :

Dr NB : My course leader and who supported me through my family troubles and must have written an amazing reference for medical school.

Dr PT: For matching my levels of insanity and providing some unforgettable lectures. Oh and also offering me the opportunity to go and do science outreach in Gibraltar!

Dr AM: For being a double act with Dr PT and for my daily insults and just putting up with me in general.

Dr VCJ:. For the support during my dissertation even if I was a complete mess! And being one half of the double act that got us through biology

Dr CL: For being one half of the double act that got us through biology and making genetics less painful, your obsession with yeast rivals my Sherlock addiction.

Dr DG: For just saying Hi every time I passed you in the corridor, I only had you for two lectures but you were still one of our favourites!

Dr AA: For being the person I was determined to prove wrong ( remember that time you said no one ever got into med school straight from undergraduate), and for the final time …. My A levels were awful!

( Yes that felt weird calling them all by Dr, normally I’m just hollering their names in the corridor after them)

Also to Sujata Patel for being the best boss in the YSC and helping me through my dissertation, I honestly loved every second in that lab and I miss our talks already! You have set me up with my newest passion in life and I hope to start something like the demo competition at Warwick!

The student ambassadors for being the best bunch of misfits ever and putting up with my insane amount of energy at 7 am on open days. You have been the best co-workers I could have asked for and I hope you get as much out of the job as I did.

My best friends for every pint, takeaway and the stressed out the day we went through. ( There were a lot of tears after this photo). I could not have asked for a better bunch of humans to spend my time at uni with. I miss you all already and going back to uni without you all will feel wrong. A special shout out to my best friend Rosie , somehow the lecturers always got us mixed up and we became the best double act UCLan had ever seen ….

View all posts by medbeeblog

There was an error retrieving images from Instagram. An attempt will be remade in a few minutes.